On Christmas Eve, Aquavit (or “akevitt” as we say in Norway) is consumed extensively throughout many households in Scandinavia, my own being no different. With a heavy meal such as smoked mutton, pork belly, sausage, meat patties, boiled potatoes, sauerkraut and mashed rutabaga, beer is the natural pairing (because of the saltiness of the meat), but the aquavit dram is thought to be a necessary partner as it is thought to help digest the heavy  meal. Usually drunk neat and chilled, many experts however insists that by chilling it, a lot of the complex, layered flavors are not allowed to come out, and that room temperature is the correct way to enjoy this beverage.

Aquavit, comes from the Latin word “aqua vitae” and means water of life. The base is often potato vodka, which is then flavored with dill, caraway, aniseed, fennel, coriander and other savory spices. This was originally done to mask the harsh flavor of the base spirit, although these days this is hardly necessary as there are some extremely sophisticated aquavit producers out there. Potato was selected as the base ingredient, being abundant and inexpensive in Norway and easy to grow in the cold, harsh climate. As the website for Linie described an old clergyman saying: “Potato can be used in bread and animal fodder, but it is most suitable for the making of aquavit”. Those Norwegians sure know how to prioritize!

Linie, is one of the better and more well known aquavit producers, taking its name from the Norwegian word for “line”. The name was created  because of its interesting history and origin. During the old days, the Linie casks were transported on ships that traveled twice around the equator.  This started as more of a coincidence, as the original cargo was fish, ham and cheese on their way to Indonesia to be sold there, due to demand for these items.  On the ship were also casks of aquavit, but because the customs were different in Indonesia, the Norwegians were not allowed to sell their aquavit. Hence, the aquavit returned home to Norway, after having crossed the equator twice. The barrels were then opened, and it was discovered that the journey had a miraculous effect on the spirit; the change of temperatures, the rocking motion of the sea, as well as the salty air from the sea had contributed to a multidimensional flavor profile.  Today, there are no more ships like in the old days, but the casks still travel for 4 1/2 months as deck cargo, taking them through 35 countries, crossing the equator twice. Thus, Linie, or “line, refers to the equator.  This is what gives the spirit such a unique taste, and of course – the story helps setting it apart from other aquavits! 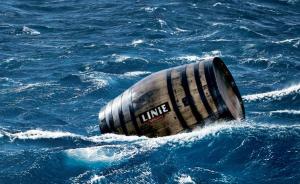 Linie is matured in sherry casks, (previously aging Oloroso sherries) unlike many other Nordic aquavits. This imparts a golden color and vanilla flavor into the spirit, and along with the slow oxidation helps smooth out the harsh flavors of the spices and base spirit.  After its voyage in the casks, it is still matured for another 12-14 months. Depending on the type of casks used (newer versus older), it can be a pale yellow or dark golden color. Most often it will have an alcohol content anywhere from 40-45%.

If you don’t enjoy drinking your spirits neat,  the good news is that Linie is an excellent base for a mixed drink, imparting exciting spices, body and flavor to your cocktail.  The best way is to start simple, and then experiment from there. I have added a starter recipe below, that I’ve named after my dog, Thor. Skaal!!

2 oz Linie Aquavit (or Aquavit of your choice, but please choose Norwegian – ha!)

Combine all ingredients in shaker, add ice and shake vigorously until all ingredients are combined. Strain and pour into highball glass filled with fresh ice, garnish with a lemon twist and enjoy! 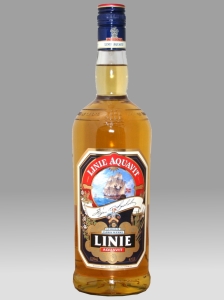