Jonsok, or Sankthansaften, is a midsummer marker traditionally celebrated on June 24th and historically a Catholic holiday. Jonsok / Sankthans is named after the baptist Johannes, whose Danish saint name is St. Hans.

Religious history describes how Johannes baptized Jesus in the Jordan river, and was the first one who recognized him as the Messiah. The word Jonsok is an Old Norse word which translates to “waking night for Jon” (short for Johannes).

Today, Jonsok is celebrated on June 23rd in Norway. Although no longer a registered public holiday, it’s still observed in a non-religious way by celebrating summer solstice and the turning of the sun.

In Sweden, this day is almost as important for the Swedes as May 17th is to the Norwegians. They are known to party hard, which is why midsummer celebrations always falls on a weekend.

Bonfires are central to the celebration of Sankthans, and are lit all across Norway (and the rest of Scandinavia). This a tradition dating back hundreds of years and is still very much practiced today.

It is believed that the fire was lit to help strengthen the sun as the days after Jonsok would get shorter.

Another theory was that it would keep trolls and other evil forces away, as well as protect the farm animals from wild predators.

The evening of Sankthans was considered to have magical properties.

People believed that all kinds of life, from the soil to grass, flowers, and trees had extra power during this time. By this date, everything that was supposed to sprout and grow, had been planted in the ground.

Superstitions and magic are often associated with Sankthansaften. For instance, it was thought that by putting seven kinds of flowers underneath your pillow, it was possible to see who you would marry in the future.

There is also a much less nicer tradition of burning witches on the fire, as it was believed they were evil and that Sankthans was their main day to gather.

You will sometimes see a witch in the form of a doll on top of bonfires sitting on a broom (particularly in Denmark), to symbolize a way to keep witches and evil away.

The history behind this is way too complicated, deep and long to discuss in detail in this blog post (also because I believe this is a damaging result of patriarchy and demonizing women in our history), but one I am intrigued by and would love to tackle in a separate post.

Today there are competitions across the country about who builds the biggest and tallest bonfire.

The bonfire from Aksla in Ålesund is currently the nation’s largest, and ended up in the Guinness Book of World Records in 2016 when the height reached over 47 meters (154 feet).

Sankthanshaugen in Oslo also has a large bonfire every year, and may not be hard to believe considering its name.

Historically, small towns and farms would gather forces and build bonfires, and spend time together, dancing, eating and playing games. This is still very much practiced today both privately and publicly.

The oldest, most traditional food around Jonsok is rømmegrøt, a classic sour cream porridge served with a dollop of butter, sprinkled with sugar and cinnamon.

Rømmegrøt was considered party food in the old days and served at weddings, to celebrate births and at Santkhansaften.

While porridge in all forms has always been an important dish in Norway throughout history. It wasn’t uncommon for families to eat porridge 3 or 4 times a week, along with bread.

Rømmegrøt, however, was considered more decadent and luxurious because of the addition of sour cream and served during special occasions only.

In my area of the country, western Norway, it’s common to make the porridge with semolina flour, while other parts of Norway they’ll only use regular flour.

In my family we also topped our rømmegrøt with raisins, I find the sweetness of the raisins paired with the tanginess of the sour cream to be quite tasty.

Often, flatbread and charcuterie is served alongside it, contrasting the sweet and sour flavors of the porridge with the saltiness of the charcuterie. Today, barbecue foods like hot dogs are very popular, complimented with potato salad, grilled vegetables and more.

When I went vegan I thought I had to give up the tradition of rømmegrøt, but today there are wonderful plant-based versions of both sour cream and charcuterie.

I’m happy that in today’s world, it’s no problem whatsoever to re-create my fabulous childhood meals, with an authentic taste that brings back treasured memories without hurting animals. Such a fantastic feeling, and what fun to come up with new and improved recipes!

I add a tablespoon of lemon juice to the porridge, as I find the non-dairy sour creams not as tangy as the dairy version.

Additionally, starting the dish with a little butter in the pot helps re-create the richness of the dish, because vegan sour creams are lower in fat than traditional sour creams. While lower fat is normally preferable in other meals, in this particular dish you want as much fat as possible to mimic the original version.

Yes, this is a decadent, over-the-top porridge, but definitely worth making, so I hope you will try it out!

Melt the butter in a medium, heavy bottomed sauce pot.

Add the sour cream and stir over medium heat. Sift in both flours, then slowly add in the milk to thicken the porridge, constantly whisking to avoid lumps. This should take about 5-10 minutes.

Add the salt and sugar, whisk again and serve right away, sprinkled with sugar, cinnamon and a dollop of butter in the middle. 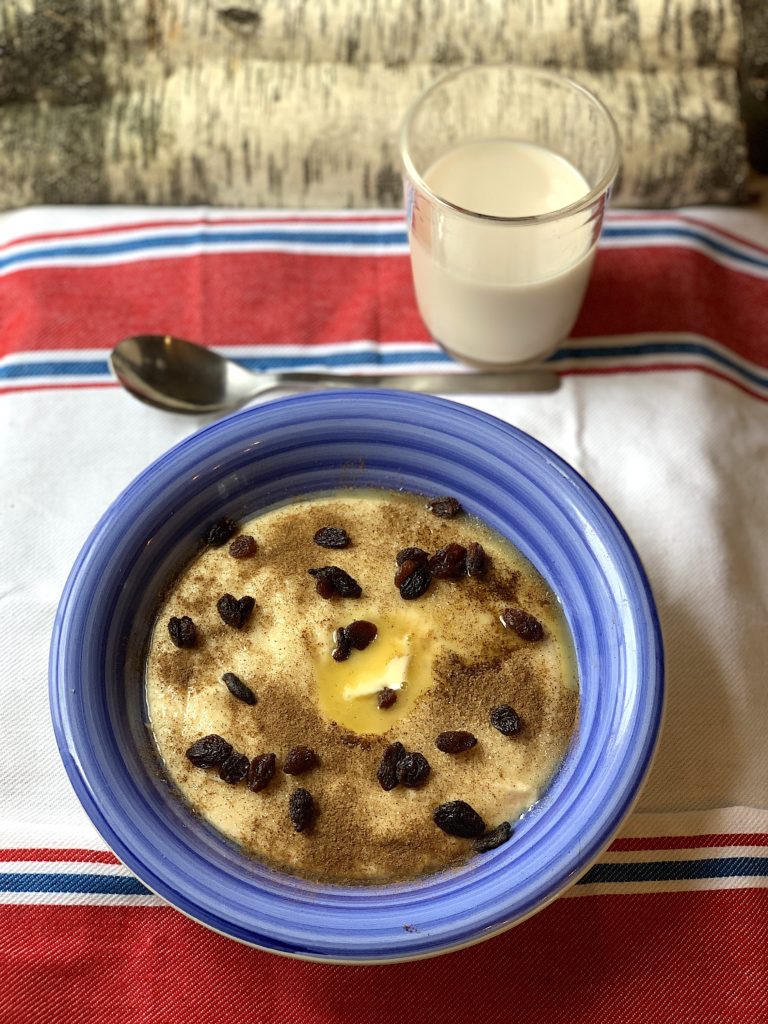