Potatoes. What could be more Norwegian than that?

Although the potato has lost some of its stronghold in Norwegian cuisine as Norwegians’ taste buds are becoming more international, it is still a huge part of our diet.

I can’t count how many times I’ve been at restaurants with Norwegians when dishes come out and the question arrives: “Where are the potatoes?” It can be difficult to explain to some that not everyone feels that this side dish is essential for a meal to be complete.

The potato arrived in Norway in the 15th century, when the coastline communities (mainly priests and military officials) began growing it in their fields along with Danish potatoes.

Priests would often move from district to district and bring along their knowledge about potatoes and how to cultivate them. This is why some priests were called “potato priests”, and it was thought that some priests seemed more excited to preach about potatoes than delivering the message of God. The average Norwegian was initially quite skeptical of the potato, calling it the “devil’s fruit” because it grew below the earth. It was also believed people could become leprous from eating it.

People’s diets were generally very bad in this time era—many died from scurvy due to lack of vitamin C. After a while, it was discovered that the potato had many health benefits, and people began adding it to their meals. The huge growth in Norway’s population created a need to increase food production in the country and by 1809, potatoes contributed to 6% of the total food energy. By 1835 it grew to 26% (according to regjeringen.no—the history of the potato).

During the war with England from 1807 to 1814, the potato played a particularly important part in the Norwegian cuisine, saving many from starving to death, since other food items like corn were scarce due to restricted imports. Potatoes are an adaptable plant and can grow in very cold climates, all year long, making them perfect for Norway.

Today, Norwegians are more adventurous when it comes to preparing potato dishes. We eat them mashed, fried, and baked, and shred them to form special potato dumplings called “potetball” or “kumler.” 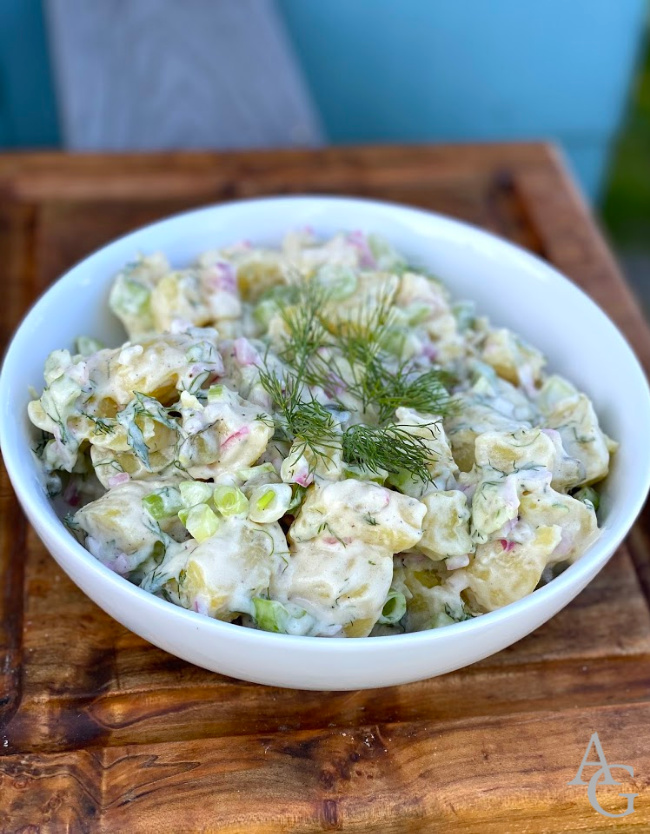 During midsummer, however, new potatoes are in season in Norway and the most popular dish to make is undoubtedly the potato salad. Not as heavy or creamy as its American counterpart, we add just a touch of sour cream, or none at all, and add lots of acidity with lemons and pickle juice to keep it light, fresh, and focused on the potato itself.

Food during the summer in Norway is kept simple, highlighting the ingredients of the season. You can read more about the midsummer tradition or “Sankthans” as we call it in Norway, in my blog post here.

Eating this potato salad always brings me back home to Norway, fueling memories of the midnight sun, a view of the fjords and the high mountain tops, and spending precious time with loved ones. I hope it will do the same for you! 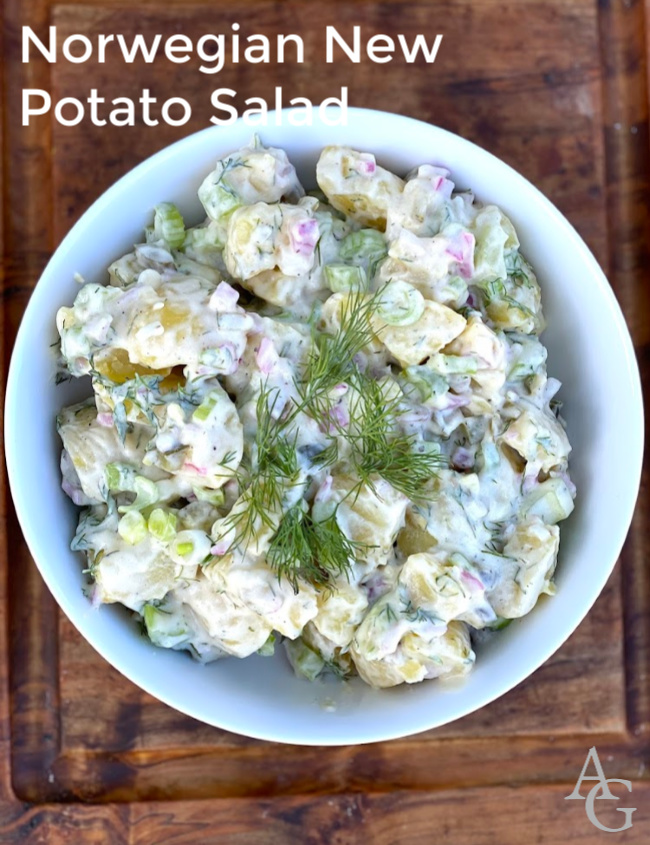 Peel and boil the potatoes until somewhat soft but still giving a little resistance when piercing through with a thin knife. Let cool. Dice the potatoes into 1-inch cubes (2.5 cm).

In a large bowl, combine all the other ingredients. 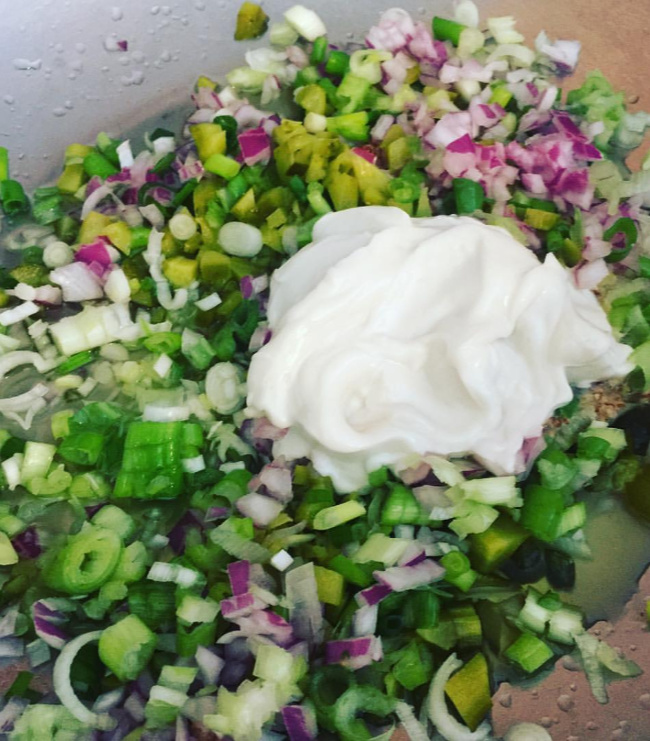 Add the potatoes, and season generously with salt and pepper. Taste if it needs more lemon juice or acidity or fresh herbs as well.

Refrigerate and let the salad sit for a few hours before serving to allow all the flavors to blend in. Serve room temperature with your favorite BBQ food or grilled foods.

This article originally appeared in the June 16, 2017, issue of The Norwegian American.