Bacalao is a Spanish term for dried, salted cod but also refers to a flavorful, slightly spicy stew with tomatoes, roast peppers, potatoes, and olives. Bacalao is one of those dishes I just remembered how much I miss and is a very typical and popular dish in my home region of Sunnmore in Norway. There is even a restaurant in Alesund called XL Diner dedicated to serving bacalao only and they offer a myriad of varieties.

When you think of ingredients like garlic and piri-piri, you hardly connect these to Norwegian cuisine. Spicy foods are not typical of Norway, we tend to be accustomed to milder, simpler flavors. So how did this dish become so popular in Norway and why is it considered as Norwegian as smoked salmon and pickled herring?

Before I continue, I want to make clear that I do not eat fish anymore, but to give this dish and recipe context, I need to dive into the history of Norwegian food history to better understand how this dish, bacalao, has become a staple in Norwegian cuisine. Dried fish has been a commodity for many hundred years for Norway, most likely stemming as far back as to the Viking age. 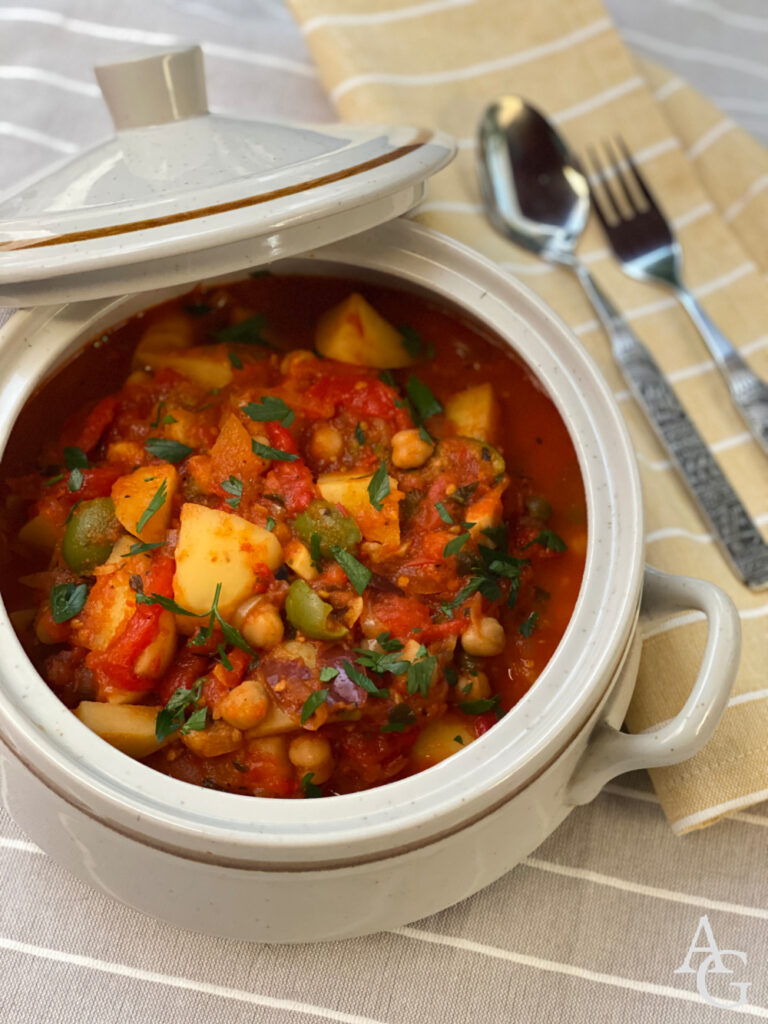 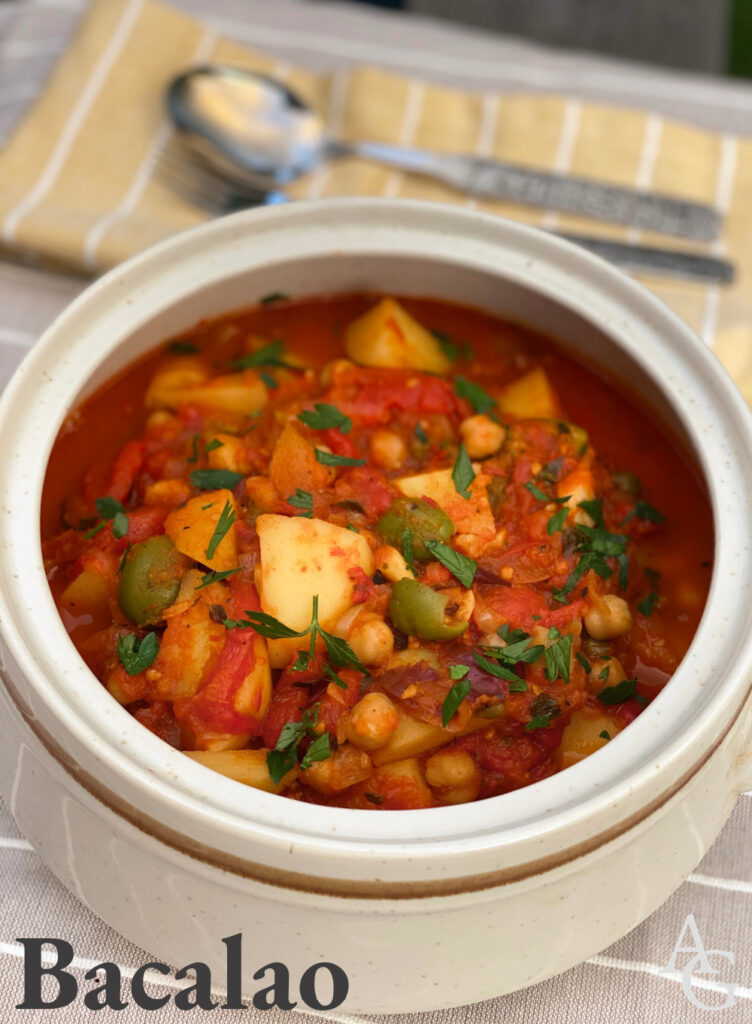 “Klippfisk” is a Norwegian term for salted, dried cod, and comes from the word “klippe”, which is Norwegian for the rocks by the sea, and because the fish was left on the seaside rocks to dry. Klippfisk is a newer phenomenon, probably around 300 years old. Other methods are used for drying the fish today, but it’s a common theory that the best klippfisk is the one that is left to dry out in the sun. 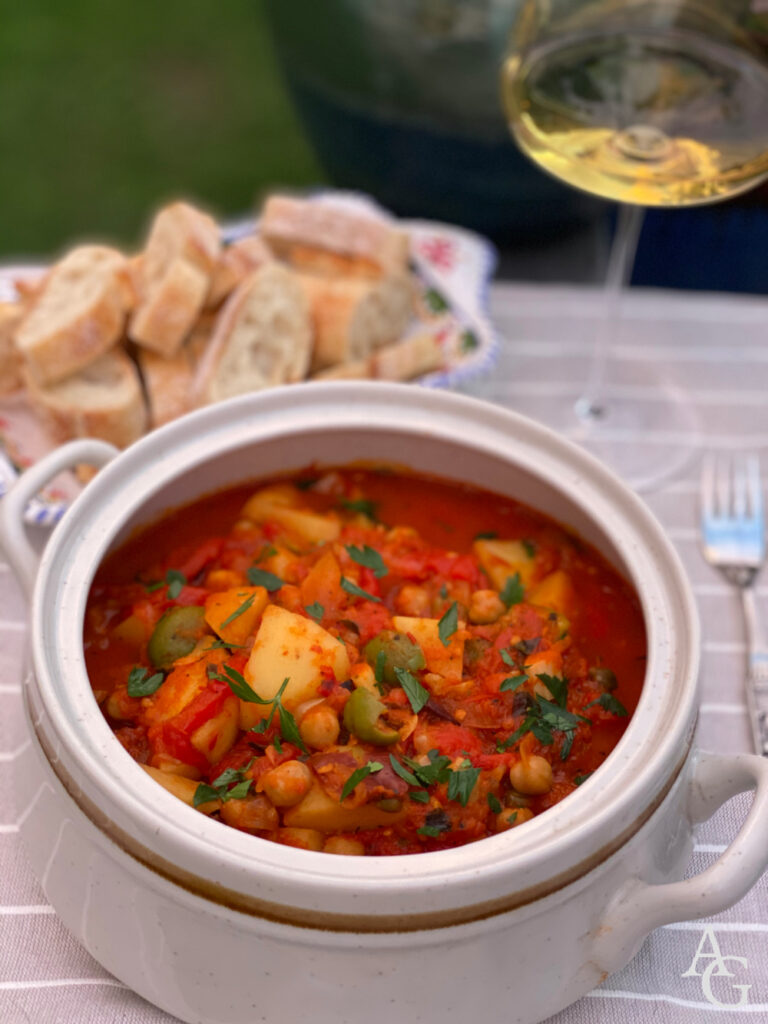 It was the Spaniards, more notably those from the Basque region, who invented klippfisk while fishing for cod in the seas of Newfoundland, Canada, and other international coastlines. The Spanish were fishermen, much like the Norwegians, and while the Norwegians would eat dried fish, the Spanish were fortunate to have great access to salt and consequently started to add salt to the fish to preserve it.

It was a Dutchman, however, who started klippfisk production in Norway, not a Spaniard. Jappe Ippe was his name, and he saw a great opportunity to sell klippfisk along the windy coast of north-western Norway. Cold, windy conditions are necessary for the production and drying of klippfisk, and Norway had plenty of that. He bought several farms for this purpose, but perhaps went too big, too soon.

After 10 years, the Dutch banks would no longer lend him any more money because the war had ended in Holland and they needed the funds at home, and Jappe Ippe was forced to shut down. Although not successful in realizing his big business plan, a seed was planted, and the Scottish followed suit and ran the klippfisk industry through the 18th century.

Another interesting fact I found through researching, was that foreigners installed a law preventing the Norwegians from gaining the knowledge of how to produce klippfisk. They wanted to keep the monopoly on this commodity and as a result, they instituted long jail times, even the death penalty, for people who broke this law.

Finally, in the 19th century, the Norwegians took over the klippfisk production and many families took on side jobs drying fish for larger producers worldwide. With the men being out at sea, this often became a job for the women. The fish was rinsed in the sea after drying, and with the women lacking the right shoe gear to stand in the water, they regularly were barefoot – a cold experience in the middle of winter!! The money earned from this work was thus handled by the women, who would decide how to spend this extra income.

Originally, Kristiansund was the leading city for klippfisk commerce, but later, Ålesund in my home region of Sunmøre became the capital of klippfisk as the fish gradually became depleted further north.

Having indoor locations for drying, the fishermen in Ålesund were also not dependent on the weather, and all in all, became more competitive in the end. Nevertheless, Kristiansund is still regarded as the ‘klippfisk’ town in Norway today.

Now with all this said and history explained, let me make one thing clear: Personally I think a better, more sustainable (and flavorful!) way to make bacalao, is to substitute salt cod for hearts of palm and chickpeas.

Yes, it might sound strange, but when you think of it, it’s the spices, potatoes, and roast peppers that really make this dish so tasty and unique, and it’s always what I looked forward to when my mom made it for us growing up.

With our oceans getting depleted in just a decade or two if we don’t start thinking of other things to eat, I think it’s a great idea to open our minds and hearts to new ways of cooking. I promise your enjoyment won’t suffer!

So with this blog post, I’m giving you the ultimate bacalao: with all the familiar flavors, added nutrient-rich ingredients (chickpeas are rich in fiber, fish have none) that are less costly for both your wallet and the environment—and I really promise you won’t miss the fish. 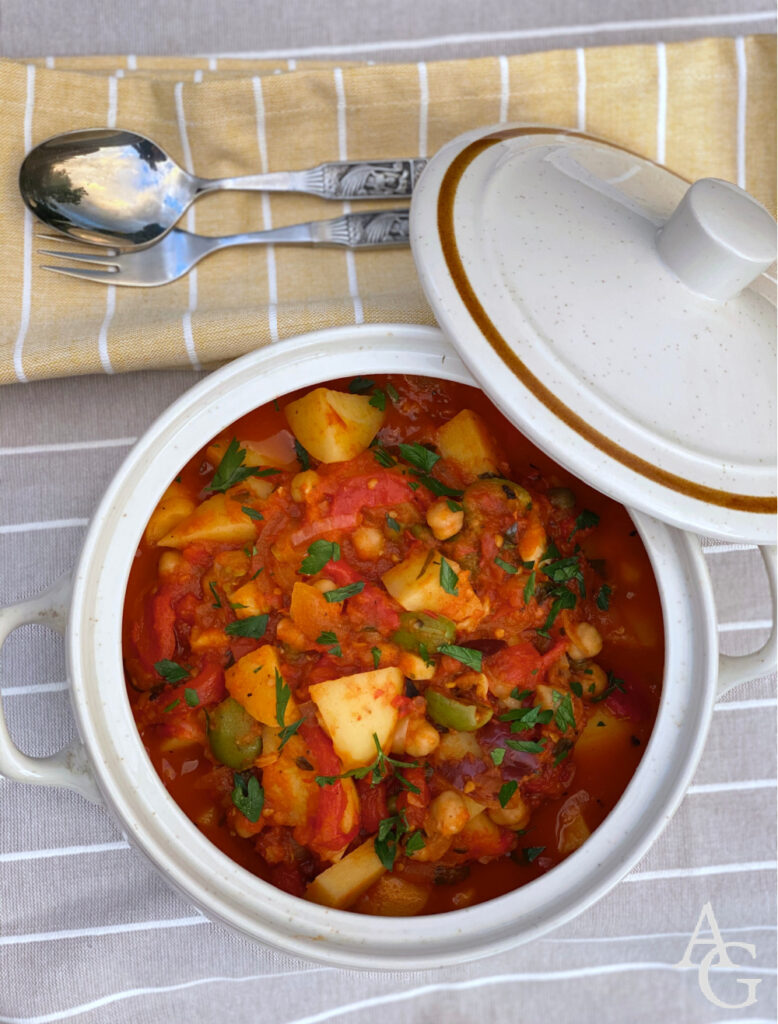 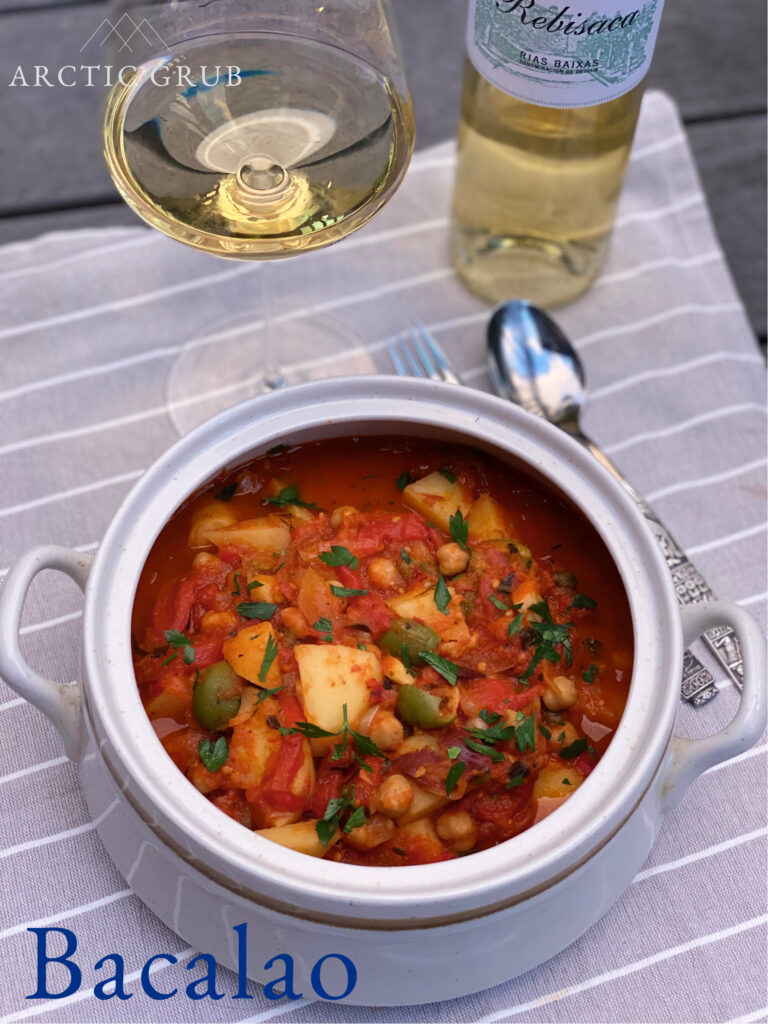 If you are making your own tomato sauce, start by placing the halved tomatoes on a sheet tray fitted with a rack, sprinkle with salt, pepper, and place 2 of your smashed garlic cloves and the sprigs of fresh thyme and oregano on the cut side.

Place the tomatoes in a blender, and buzz a few times until you have a chunky sauce, and set aside.

If you’re roasting your own red bell peppers do that next – either over a live gas flame until charred on all sides or in the oven at 400° for about 40 minutes, turning them over halfway.

Place the peppers in a bowl and cover with plastic wrap until they cool down, then remove the skins and clean them of seeds/membranes and slice thinly, then set aside.

Place a large, heavy-bottomed large pot over medium, heat, add a drizzle of olive oil and throw in the sliced onions with a pinch of kosher or sea salt. Sweat the onions for 3-4 minutes, before adding in 6 of the garlic cloves and the red chili peppers and saute for another 1-2 minutes.

Add in the cubed potatoes and the tomato sauce or canned tomatoes with the smoked paprika, bay leaf, sherry or sherry vinegar, and a couple of pinches of kosher salt. Let simmer on medium for about 10-15 minutes, then add in the chickpeas, hearts of palm, capers and black olives and simmer for another 15 minutes.

Finally add in the banana peppers and chopped fresh parsley, taste, and season with additional salt and simmer for another 10-15 minutes, the final cooking time should ideally be around 45 minutes to 1 hour.

Garnish the bowls of bacalao with extra fresh parsley and serve with a good chunk of bread and a glass of your favorite red or white wine (my suggestions are listed below). 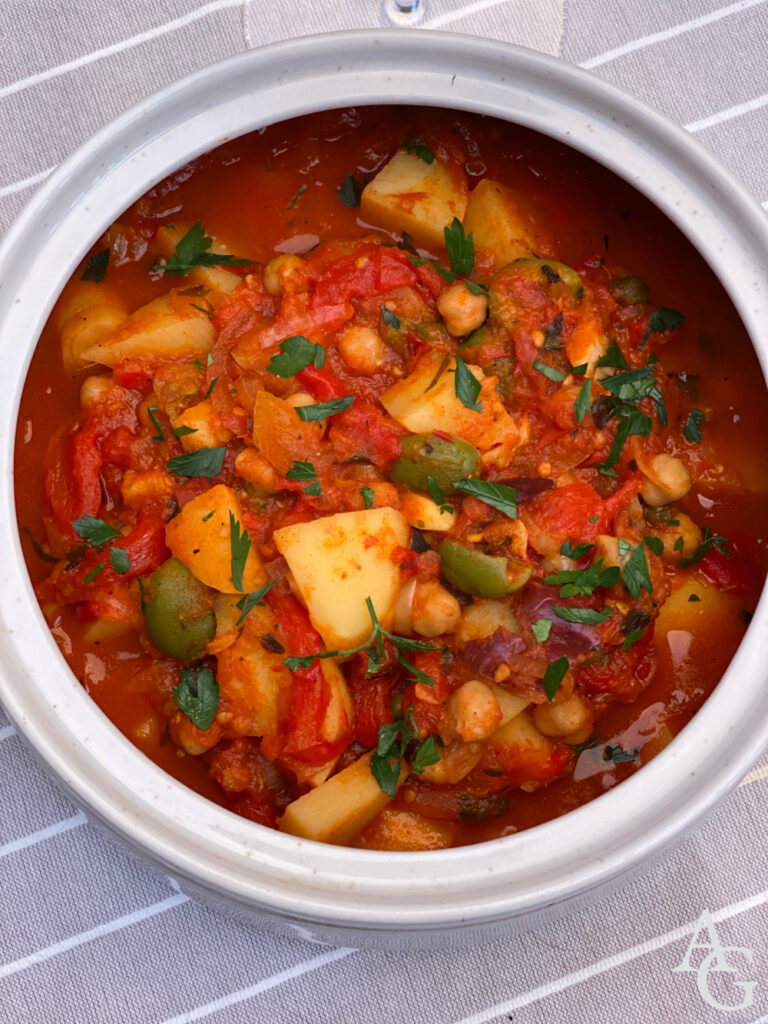 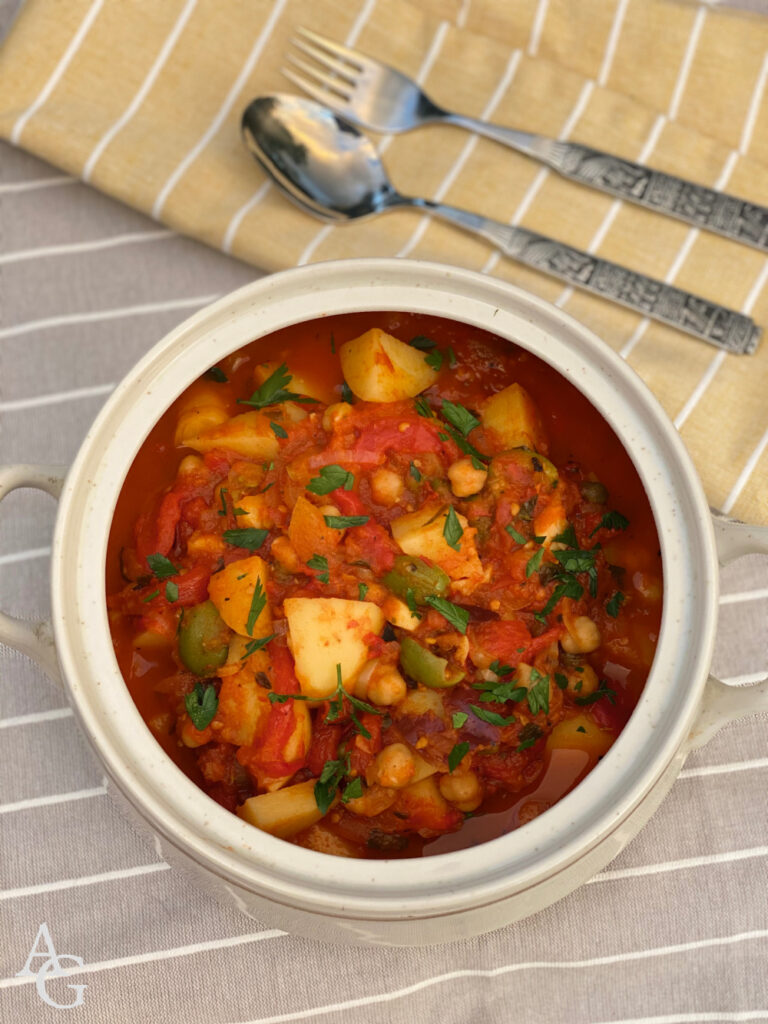 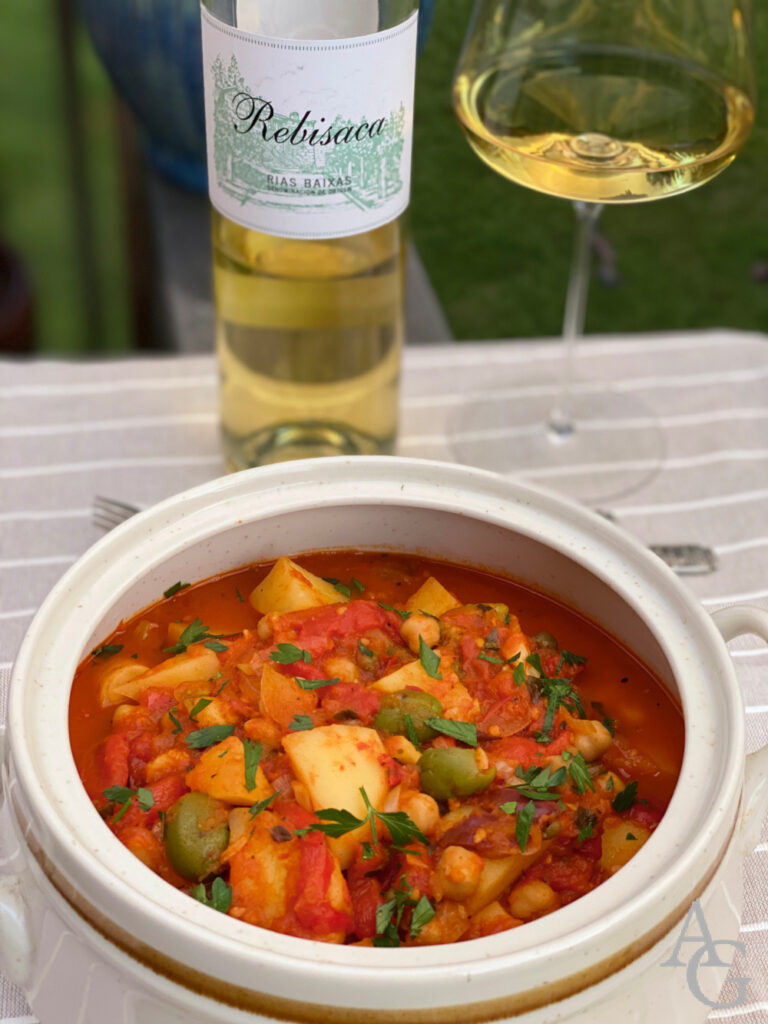 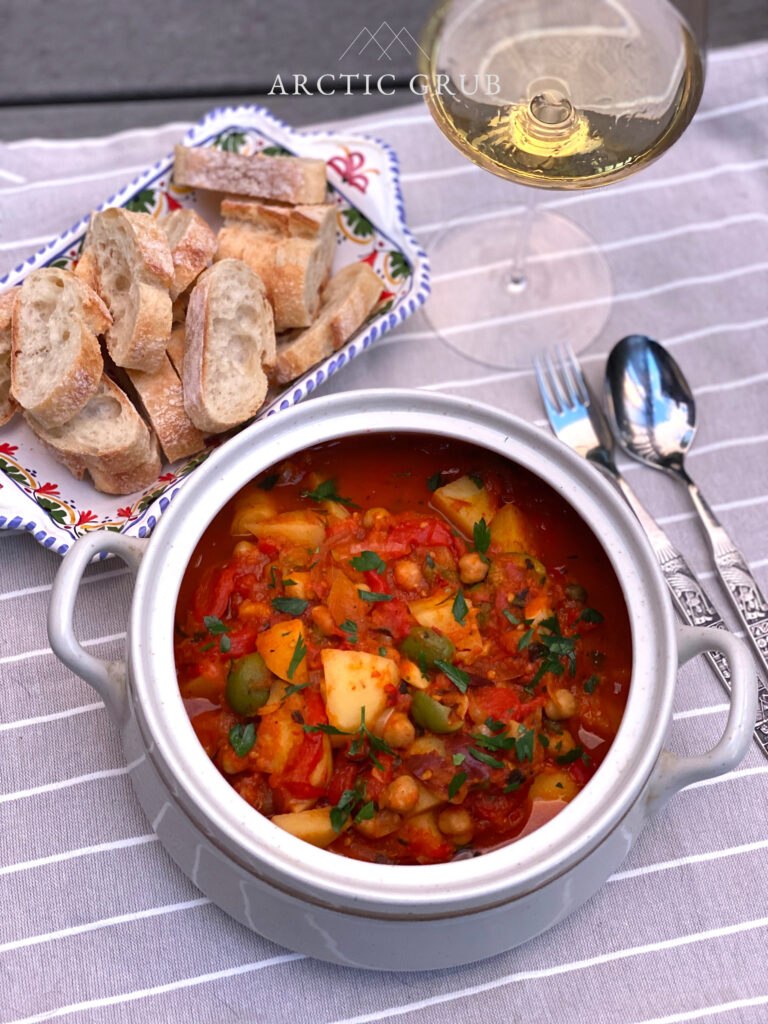