I was searching my site to see if I had ever shared a recipe for Norwegian ‘tekake’ with you and was surprised to see I hadn’t! It’s such a simple and satisfying cake, really no Norwegian food blog should be without a recipe for it. This week I experimented with a few different recipes and came up with one I really wanted to share with you.

Tekake literally translates to “tea cake” but can be considered Norway’s coffee cake. I remember buying this cake at bakeries as a special treat as for some reason it wasn’t something my mom made at home. I remember the cake being doughy (it is made with yeast not baking powder), but had this deliciously crunchy, sweet, and cinnamon-scented topping that made me swoon.

The cake has its roots in Trøndelag in northern Norway, where it is often referred to as ‘thekake’, but is also popular in other areas of Norway. Traditionally the cake recipes I’ve seen have raisins in the batter, but I left them out as my memories of tekake were without, but feel free to add in a handful of them if you wish. 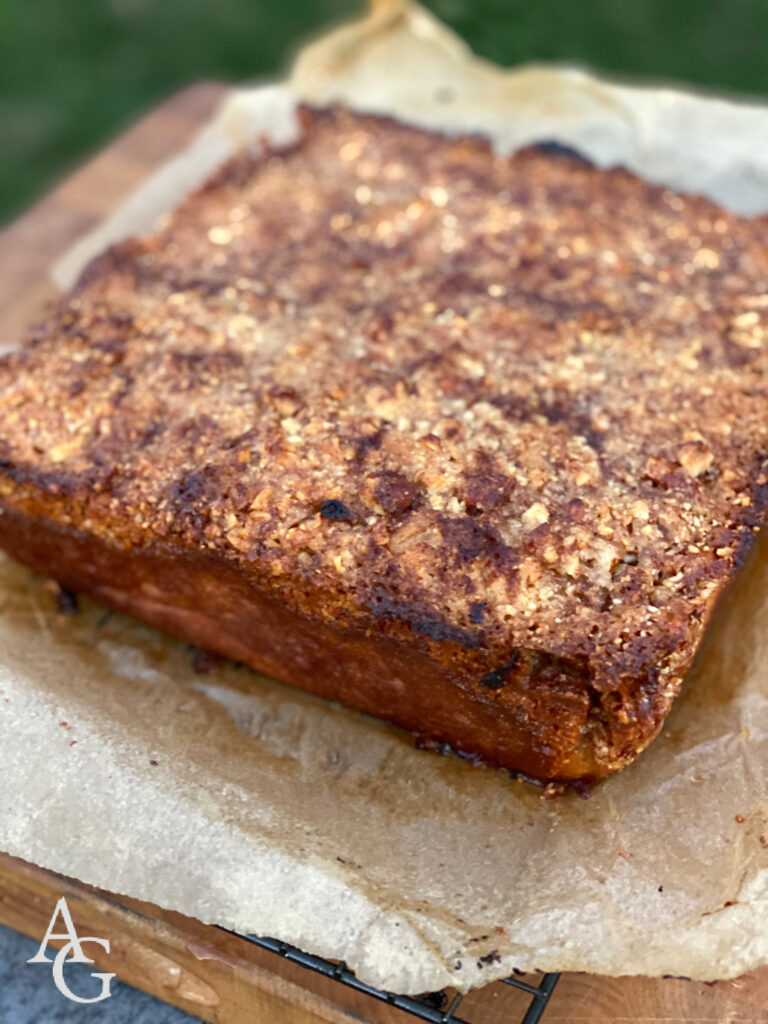 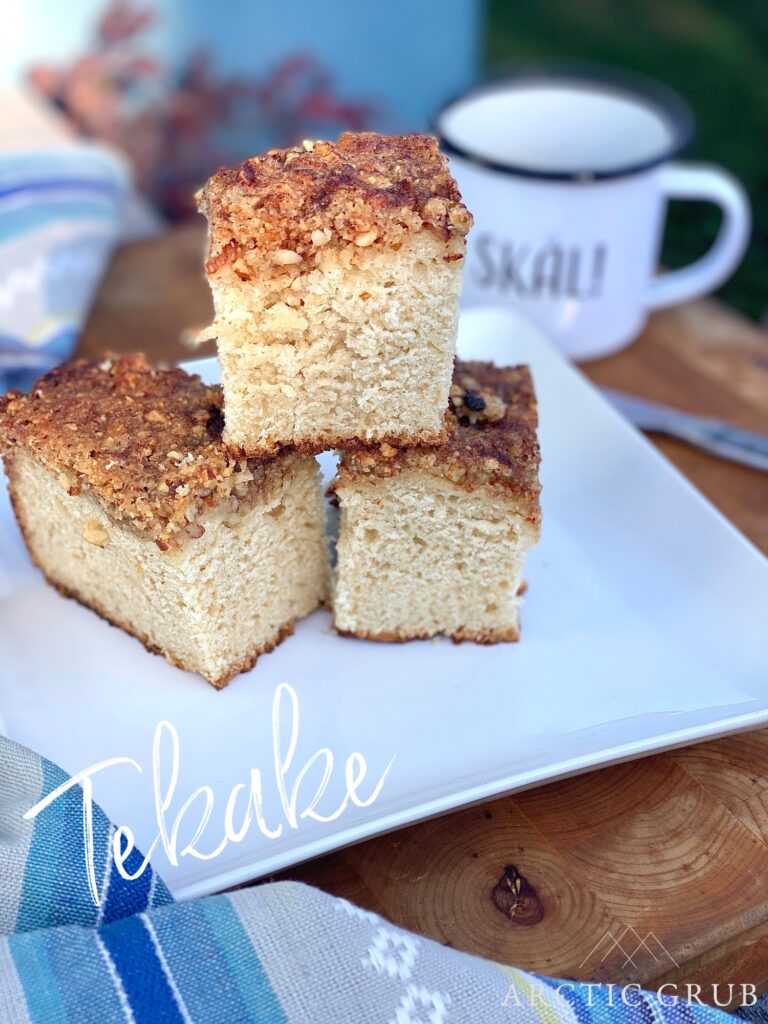 I couldn’t find much to dig up on the history of tekake, not to be confused with tebrød (tea bread), which is another recipe I’ll cover in a later post. But often it was the kind of cake your grandmother would make and the recipe has survived in families for generations and is still made in Norwegian homes and bakeries all across the country.

The familiar scent and flavors of cinnamon and sugar are something that will always conjure up memories of get-togethers at home over a pot of coffee, good friends, and “hygge”, as the Danes call it. We call it “kaffekos” in Norway – cozy times spent around the table with a cup of coffee and something sweet on your plate.

The body of the cake itself isn’t very sweet, which is why I think it’s perfect as an afternoon snack with a cup of tea or coffee and a cake you can definitely have more than one slice of. To avoid the cake from flattening, it’s important to let the dough rise three times. I know it sounds like a lot of work, but it will be so worth it—trust me! 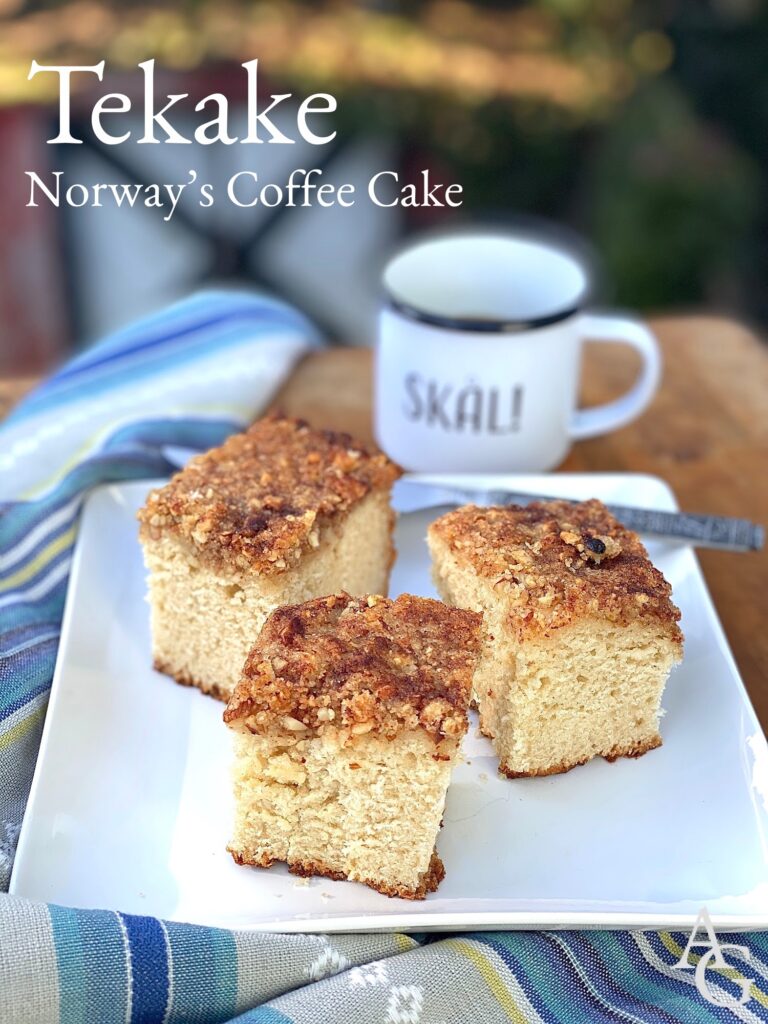 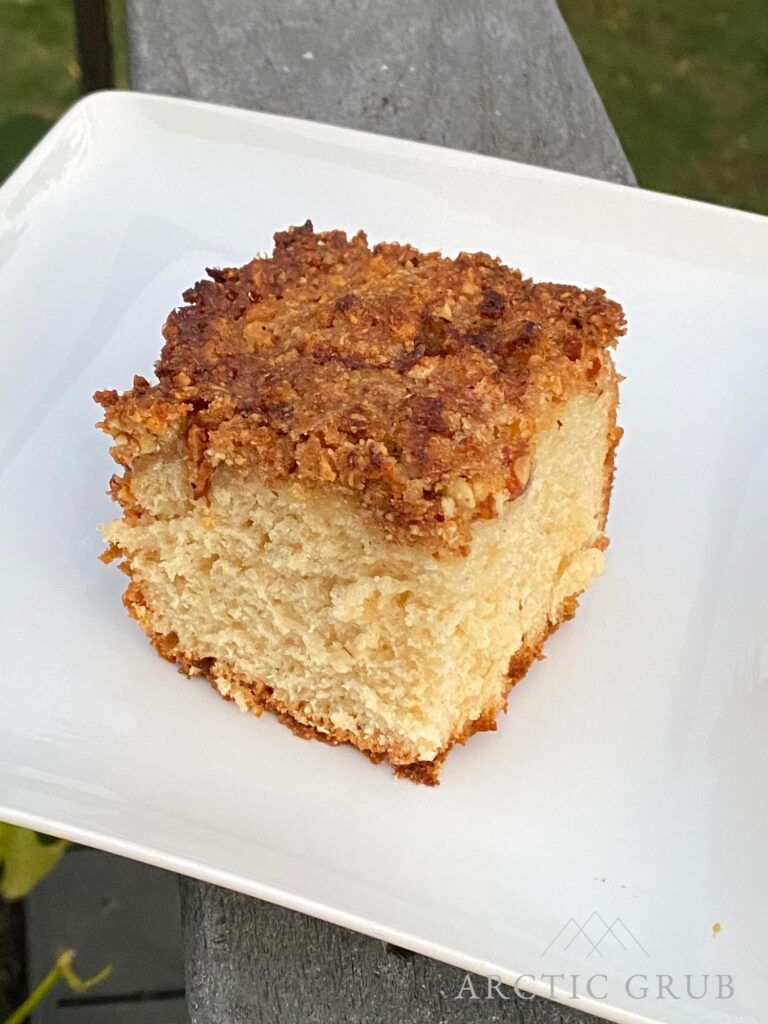 Grease and line a 10×10 inch baking pan with parchment paper and set aside.

To make the cake:
Heat up the butter and milk to about 98° Fahrenheit (37° Celsius). Sprinkle in the yeast with a pinch of sugar and let sit for about 5 minutes until the yeast is bubbly.

In the bowl of a stand mixer add in the rest of the dry ingredients, fit the machine with the dough hook and whisk to combine. Slowly add in the milk-butter-yeast mixture and knead on low-medium speed just until you have a smooth dough that has released from the side of the bowl (don’t overmix).

Cover the bowl with a towel or plastic wrap and leave in a warm spot to rise for about 45 minutes to 1 hour.

When it’s time, transfer the dough onto a lightly floured work surface, and roll the dough out to a square the length and size of your baking pan. Carefully transfer the dough into the pan, lightly tucking it in, and evening it out to cover the entire pan. Place a clean towel over the pan and let rise again for another 45 minutes.

While the dough is rising for the second time, make the topping:
Add the almonds to the bowl of a food processor and pulse a few times until you have roughly chopped almonds. Add in the butter sugars and cinnamon and pulse until everything is well mixed.

When the dough is done rising, carefully spread the topping evenly over the cake. Cover the cake again and let it rise another 30 minutes.

Cool on a rack and cut up into squares when ready to serve and make sure to have that cup of tea or coffee ready! 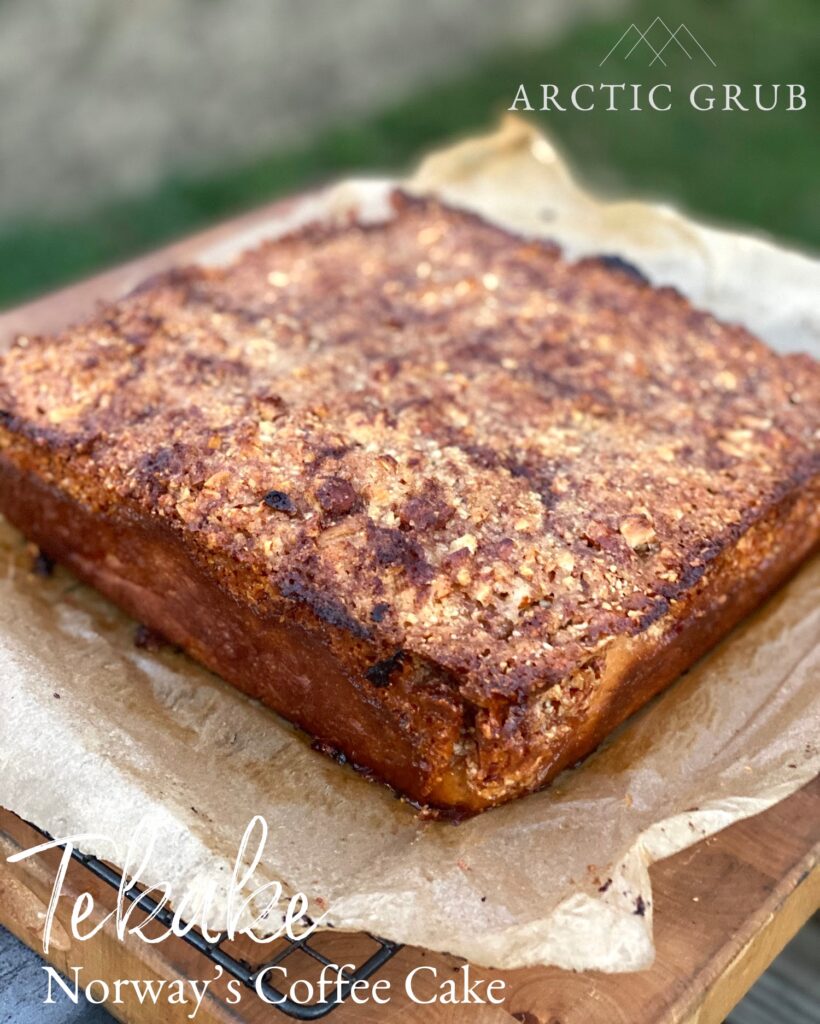 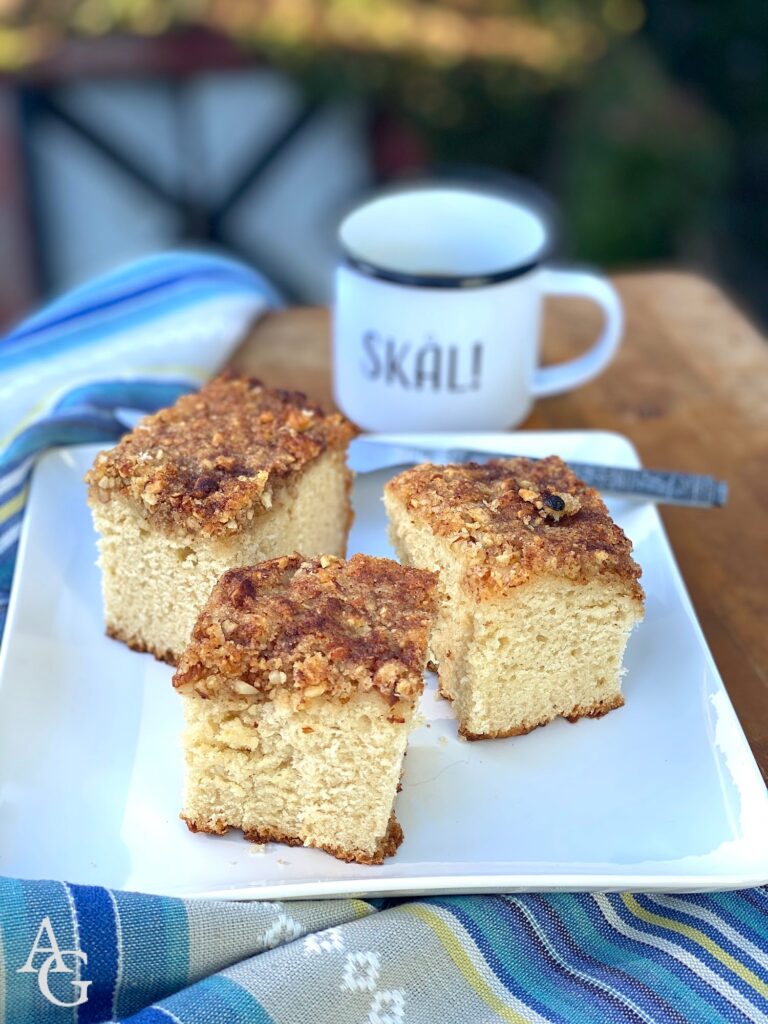 To make the cake:

While the dough is rising for the second time, make the topping: