When I surveyed my readers and followers a while back about which Norwegian dish they would most like to see veganized,  Dronning Mauds dessert (or Queen Maud’s Mousse) was right up there with “brunost” (the widely popular and unique Norwegian goat cheese).     I had to start recipe testing right away, as I have yet to see a non-dairy, eggless recipe of this dish.

Queen Maud was born in London in 1869, and her parents were the later King Edvard VII and Queen Alexandra of Great Britain.   Through visiting relatives in Denmark, she got to know her cousin Prince Carl, they married in Buckingham Palace in 1896, and settled down in Copenhagen. When the Norwegian government offered Prince Carl the throne in 1905, he accepted, and the British Princess Maud became the first Norwegian Queen following the dissolution of the union with Sweden. 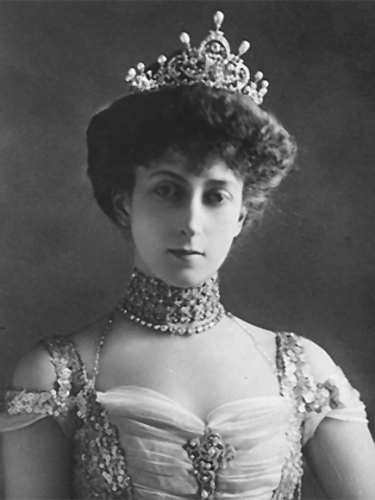 Queen Mauds dessert, also called Queen Maud’s Mousse, or Haugesunddessert, was created when she and King Haakon visited Haugesund during the coronation expedition in 1906.   The dessert was named after her in honor of their visit.   It is common knowledge that Queen Maud had a tiny waist, so not sure how much she ate, but the story goes she liked the pudding very much!

I’ve yet to meet a person who isn’t absolutely in love with this dessert.  I like to think of it as Norway’s response to tiramisu, and although the ingredients differ, the texture and flavor reminds me of the Italian classic.    The pudding is more commonly seen in the western parts of Norway,  though I wouldn’t count on seeing it at every table any longer.  This dessert is one of the old, classics I’ve loved to revive and bring back, in an even better form!

Before I went vegan, I published the traditional recipe for this dessert, which contains egg yolks, whipped cream and gelatin.  Yes, not exactly a dish for those watching their weight, much less their health, as both egg yolks and dairy, with their high content of cholesterol, saturated fat and hormones, antibiotics and other additives you find in these animal products, are less than ideal for your body. You can go here to read my original post where I also detailed who Queen Maud was and what her place is in Norwegian history.

Substituting heavy cream is no problem at all.  Full fat canned coconut milk makes a wonderful whipped cream, when the can is placed in the fridge overnight, allowing the fat to solidify as a “lid” on top of the can.  This part is what is whipped, and the liquid is reserved for later use.   For more detailed info on how this works, I like this article.

Gelatin is also super easy to swap out. I use agar agar, a much healthier alternative.  Let’s just say, there’s a reason gelatin rhymes with skeleton, as that is really what gelatin is; animal bones (along with animal skin, hooves, tendons, ligaments, and cartilage all boiled together into a goo).  Yuck, I just don’t want that in my dessert or my candy thank you!

Agar agar is a flavorless gelling agent, derived from cooked and pressed seaweed, is available flaked, powdered, or in bars.  In Japan, agar is referred to as kanten. Agar agar is a good source of calcium and iron, and is very high in fiber. It contains no sugar, no fat and no carbohydrates. It is known for its ability to aid in digestion and weight loss, helps reduce inflammation and it carries toxic waste out of the body.  Not bad for an additive in this dessert, right??

Agar is very powerful, so you don’t need a lot – I found that 1 tsp was really enough for this recipe.  You can play around with amounts, there are a million different directions if you google it, but I found mine worked well.  I also am not sure you necessarily need it although it helps set the pudding if you leave it in fridge overnight. I found that the longer you leave the mousse to chill, the better the consistency.

So now we arrive at the trickiest ingredient to sub out: egg yolks. There are many ways to sub out whole eggs in baking, but not that many that describes the yolk itself.  In any event, I tried two versions; one with the VeganEgg, a powder when mixed with water, makes perfect scrambled eggs, frittata and also wonderful in baked goods, and silken tofu.   The tofu also produced a very tasty result, although had a somewhat “soupier” texture, and I found it a bit lumpy and not as smooth as the Vegan Egg.

You can find the Vegan Egg in most health food stores and Whole Foods, and I’ve seen it more and more in regular stores as well, as people are becoming more preoccupied with leaving animal products off their plate.

When my husband tasted the dessert, he said it tasted like a regular mousse or custard, that he would never guess it didn’t contain regular eggs. Since he works as a chef for a living and has the most discerning palate of anyone I know, I will take his word for it. Also because I know he doesn’t tell me things to be nice, he is honest.  I hope you will agree with me.  The recipe might look intimidating but it’s really super simple once you’ve got the steps down, and it’s sure to please anyone with a sweet tooth!

6 tbsp VeganEgg mixed with 1 1/4 cup (300ml) ice cold water, quickly blended in Vitamix
6 tbsp confectioner’s sugar
1 tbsp vanilla extract or vanilla paste
1/4 cup (0.5 dl) port wine
1 can whipped full fat coconut milk, placed in fridge overnight
2-3 tbsp confectioner’s sugar
2 tsp vanilla extract
2 tsp agar agar mixed with 1 cup (250ml)  water (you probably won’t need more than half of this mixture)
3 oz (85 grams) shredded dark chocolate (or semi-sweet, make sure it’s vegan)
Directions:
Dissolve the agar agar in the water in a small pot, place it on the stove over medium heat, and keep whisking over heat for about 5-10 minutes. Turn off the heat and set aside to cool.
In a high speed blender, combine the veganEgg with the ice cold water, vanilla paste/extract and the confectioners until it has the thick consistency of whipped egg yolks.
Pour the mixture into a bowl  and fold in the chilled agar agar.  Add the port wine (port wine is optional, you can omit if you don’t drink alcohol).
Scoop out the solids of the coconut milk and whip it either with a hand mixer or in a stand mixer.  Add a couple of tsp of vanilla paste and confectioners sugar once the cream starts to thicken.  (I feel that when the bowl you whip it in is chilled, it works a bit better, so I place the bowl in the freezer for a few minutes before I whip it.).   When thick and cream starts to form peaks, it is done.
Carefully fold the whipped coconut cream into the vegan egg mixture.  Layer the cream mixture into a nice glass bowl with the shredded chocolate and garnish with some fresh raspberries.  Place in fridge at least for a few hours, preferably overnight, before serving. 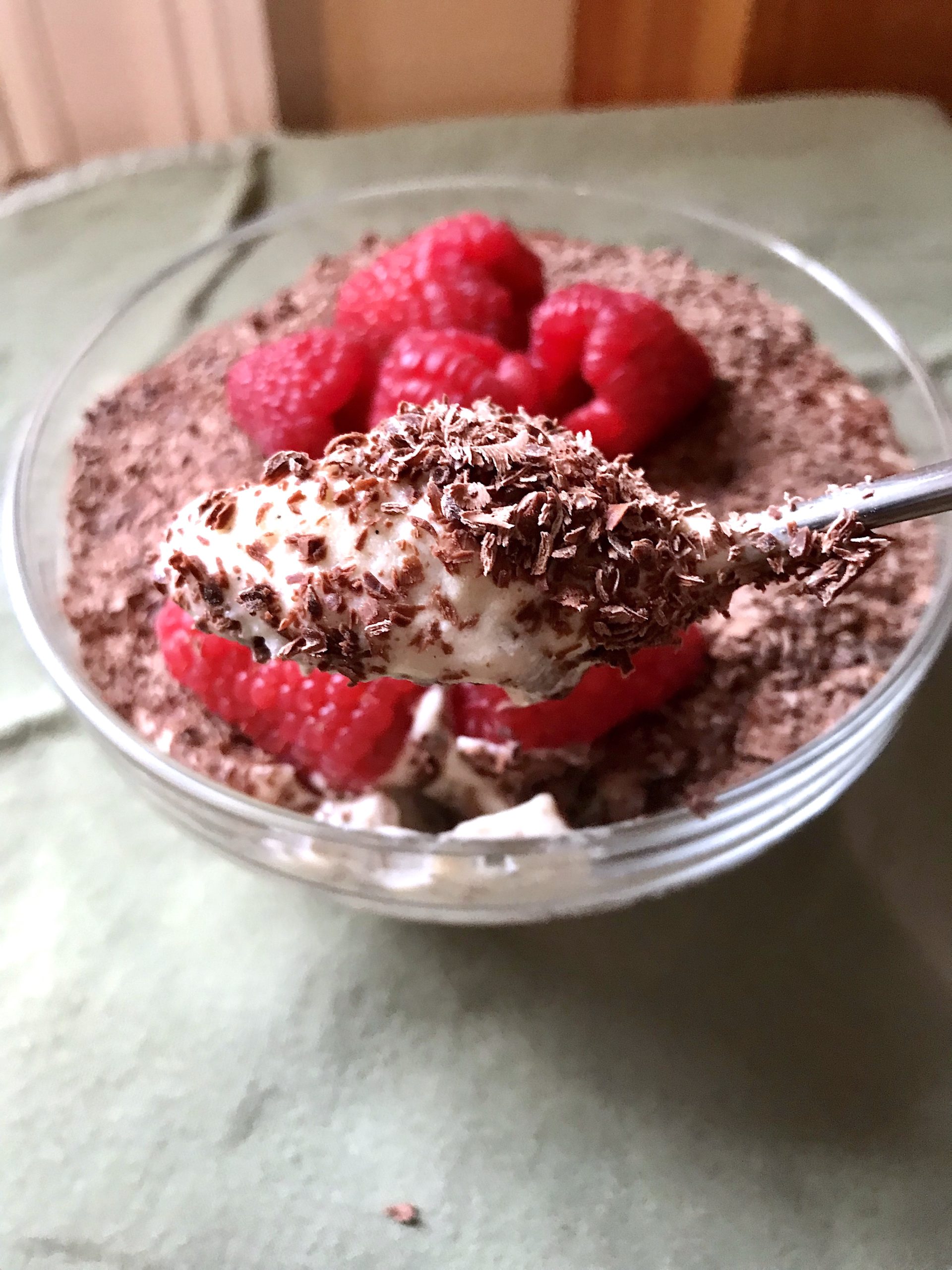