A Soup for Potato Lovers

Many populations, including people in Norway, lived in good health in the past centuries by eating potatoes as one of their primary sources of nutrition. A large number of children grew up on herring and potatoes during the 19th century. Particularly during World War II, when the potato became vital to Norwegians.

It is believed that a hunger crisis would have broken out in Norway had it not been for the nutrient-rich potato, as it supplied all of the essential proteins and amino acids for young children and people in general. The potato was also easy to plant and grow, inexpensive, and resistant to the cold weather. 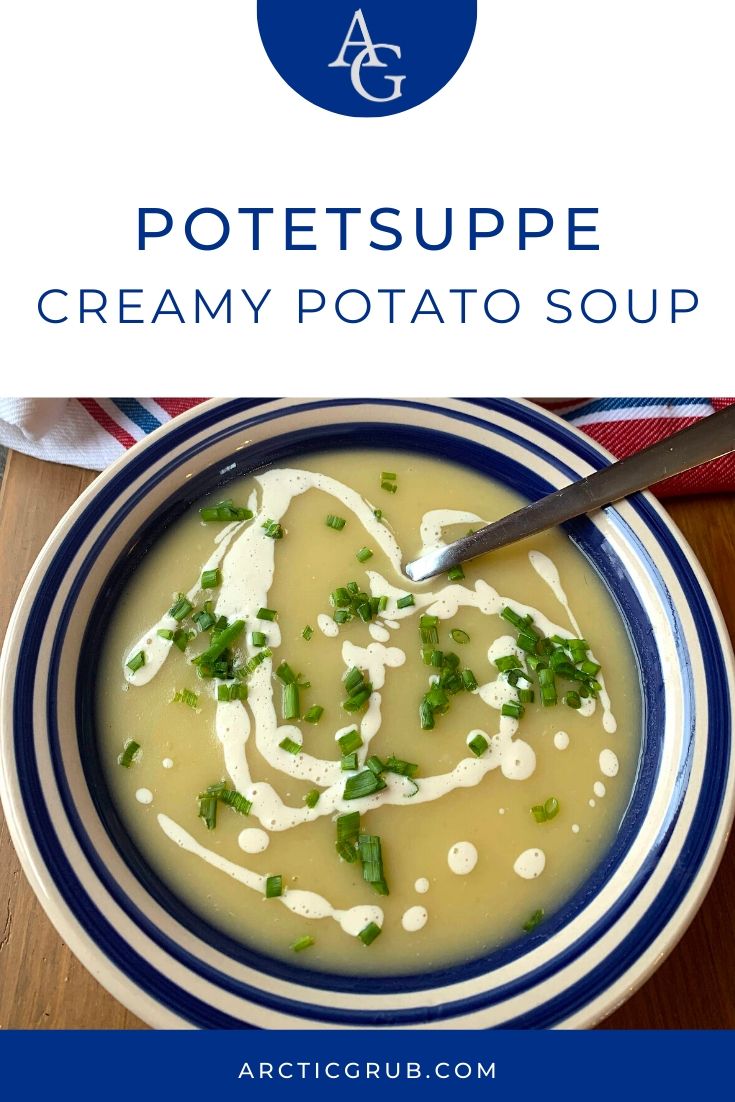 The potato remains a central part of people’s plates in Norway, and today there are endless varieties of how to prepare this delicious starchy vegetable. In short, it’s difficult to think of traditional Norwegian food without thinking about potatoes.

Many people tend to think badly of white potatoes because they either want to avoid carbohydrates or because of their relatively high glycemic index (GI), for fear of blood sugar swings and insulin problems. However, the GI is only valid when a food is eaten by itself. For instance, if you eat vegetables with potatoes, this will lower the GI of the entire meal significantly, making the meal a low glycemic index option and negating these concerns.

Potatoes contain resistant starch, which doesn’t digest at all. Resistant starch, like fiber, gets fermented in the gut, creating short-chain fatty acids. The latter decreases inflammation, stimulates blood flow to the colon, increases mineral absorption and nutrient circulation, and decreases the risk of colon cancer.

Despite popular belief, potatoes are some of the most complete foods out there. Did you know if you only ate potatoes, you would still meet your body’s protein needs? You will also meet your basic nutritional needs with the exception of vitamin B12. One medium potato contains 79 percent water, 10 vitamins and minerals, 4 grams of fiber, and 4 grams of protein.

The calorie density of potatoes is low, and someone would need to eat about five pounds to reach 2,000 calories, making it ideal for those looking to drop a few pounds as well.

To summarize, potatoes are nutrient-rich, have sustained many cultures, and are environmentally friendly. Plus, they’re satiating and difficult to overeat because they contain a good amount of fiber, which is great for your health.

With your newfound love for and knowledge about the nutrition content of potatoes, what would be some healthy ways to enjoy them?

You can bake them, boil them, mash them up, and add them to soups, stews, casseroles, and salads. Make latkes or potato cakes; slice them thinly and bake into healthier potato chips. The key is to leave out the calorie-heavy foods we often add to potatoes, like oil (think French fries), butter, sour cream, bacon bits, and cheese (baked potatoes).

The beauty of plant-based foods is that we can make dishes creamy and satisfying, yet healthy. We do this using starchy vegetables such as potatoes, carrots, and winter squash, or nutritious raw nuts like cashews, almonds, macadamias, and seeds.

I love making creamy soups from butternut, potatoes, broccoli, and cauliflower, particularly during colder winter months. It’s simple, quick, nourishing and filling. I simply cook down cut up vegetables and purée them either in a blender or using an immersion blender. You can add a little cashew cream, which is simply puréed raw cashews mixed with a little water. This works just like heavy cream, except you avoid the cholesterol and saturated fat in dairy while adding fiber, vitamins, and minerals.

In this recipe, I cooked potatoes in vegetable broth with a little sautéed onion and garlic and puréed them into a beautifully rich and silky soup. My secret trick is to add in some pre-baked potatoes, which I find adds an extra depth of flavor.

You can add some cashew cream or drizzle it on top to make it pretty, but it’s not needed to achieve a rich and creamy soup. Serve with polarbrød, as pictured in the post.

Eat this soup in good conscience, knowing you are pleasing both your taste buds and body simultaneously!

This article originally appeared in the February 22, 2019, issue of The Norwegian American.

*To bake potatoes, peel them, season with a little sea salt, and wrap in foil. Bake in the oven for 45 minutes to 1 hour until soft. Set aside until ready to use.

In a heavy-bottomed Dutch oven, heat the oil, and add the onion or shallots, garlic, and leeks with a large pinch of kosher or sea salt and sweat on medium heat (do not brown), for 5-10 minutes until soft and translucent.

Add in the raw chopped potatoes and vegetable broth (the broth should cover the potatoes by about 2 in.), bring to a boil, then reduce to a simmer and cook until potatoes are soft, about 20 minutes. Add the baked potatoes and stir to combine.

Using an immersion blender, purée the soup until creamy. Be sure you have enough liquid in the soup, or else it will be gummy. Season with lemon juice, salt, and pepper and serve drizzled with a little cashew cream and chopped chives (optional).

**To make cashew cream, purée everything in a high-speed blender until creamy. Adjust consistency with additional water if necessary

My secret trick is to add in some pre-baked potatoes, which I find adds an extra depth of flavor. You can add some cashew cream or drizzle it on top to make it pretty, but it’s not needed to achieve a rich and creamy soup.
← Sweet Orange and Vanilla Custard Buns for Easter Riskrem: A simple, yet decadent dessert →