Riskrem: A simple, yet decadent dessert

I’m a big fan of the “cook once, eat twice” concept, or in other words—repurposing a dish into a second meal to both save time and money. This is why I love the classic Norwegian dessert riskrem. Besides being super easy to make, it’s delicious, rich and a favorite to serve particularly on Christmas Eve.

Riskrem is typically served with an almond, and whoever finds the almond wins a prize like a marzipan candy shaped in the form of a pig, (yes Norwegians are a tad weird). This dessert is said to stem from the French riz a l’amande (rice with an almond), which is also a cold rice porridge that has whipped cream, sugar, and vanilla extract. 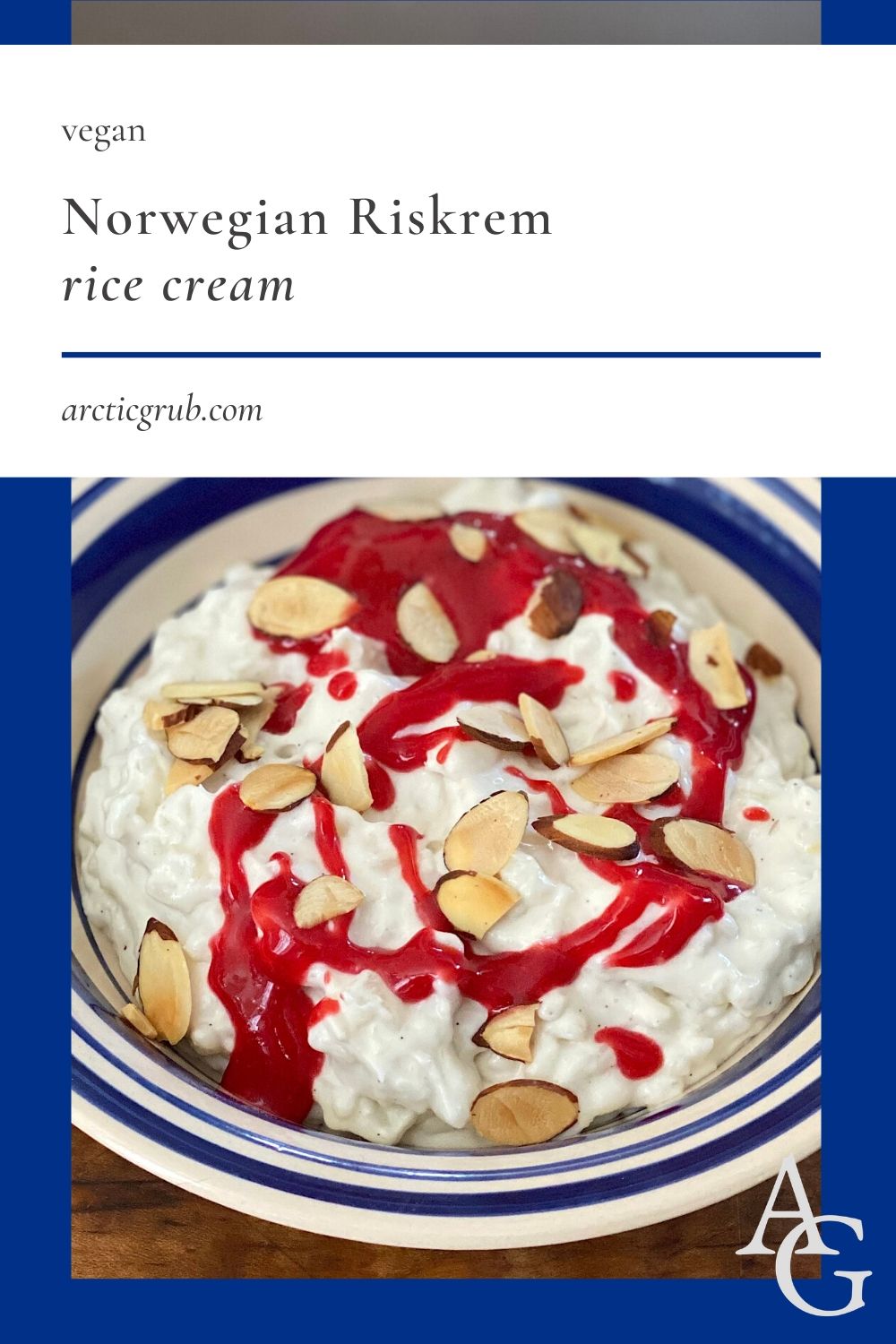 Riskrem literally translates to ‘rice cream’, and is a great way to make dessert from leftover risgrøt, a traditional dish in Norwegian homes. This creamy, sweet rice porridge is served with a dollop of butter in the middle and sprinkled with sugar and cinnamon and Norwegians have it for dinner, not breakfast, as you may think.

When you have leftover risgrøt, the next day you can pull it from the fridge, whip up some lightly sweetened coconut cream and fold it into the porridge and serve with a berry coulis. Another version we have of this dessert is appelsinris, basically the same base but instead of a berry sauce, we fold in diced orange slices. Denmark and Sweden also have similar desserts.

The best rice to use to make risgrøt (and hence riskrem as well), is a short-grained rice like arborio. I like arborio because it adds that necessary creaminess you want in the porridge. Carnaroli, another form of risotto rice, is also a great choice. Alternatively, you could use short-grained white rice, but I wouldn’t use long grain rice such as basmati, because the porridge needs to cook for a long time and these thinner, long-grained rice types would break down into mush.

Make sure to use a full-fat kind of milk, I prefer Oatly’s full-fat oat milk, but you could use any type of nut milk if you are staying away from dairy. You don’t have to add sugar to the risgrøt during the cooking period, as you will add sugar on top when serving, but I like it a little sweet. I like to sprinkle some sliced nuts (any kind is fine, but almonds are my favorite) on top of the riskrem for some texture. I should also mention my mom never served riskrem for dessert on Christmas Eve, simply because this is a very rich dessert, and on top of that decadent dinner we had on that holiday, it was just too much. This is why I recommend making this on a day when you have a lighter dinner planned.

So there you have it…today you actually get two recipes in one—whether you want to make the warm rice porridge with sugar and cinnamon or just the riskrem dessert. I won’t judge you if you eat the risgrøt for breakfast instead of dinner (my American husband prefers it that way and I’ve had to adjust:)

To make the risgrøt / porridge:
Bring water and a pinch of salt to a boil in a heavy-bottomed medium-sized pot. Once boiling, add the rice. Keep the rice simmering while constantly stirring, preventing the rice from sticking (this is why a heavy-bottomed pot is good), cooking the rice until the water is almost evaporating.

Add the non-dairy milk a little at a time along with the sugar if using and much like when making risotto, keep stirring as you add liquid until you have the desired consistency and the rice is cooked. The rice should be soft with a little texture, but not mushy when done, this process can take about 40 minutes.

When done, at this point you can serve the porridge hot sprinkled with sugar and cinnamon and a dollop of butter, or let the rice cool overnight in the fridge.

When you are ready to make the riskrem, pull out the cans of coconut milk, and carefully scoop out only the solid parts of the cream (reserving liquid for another use), add to the bowl of a stand mixer with the whisk attached, add the vanilla extract and the confectioner’s sugar a little at a time until you achieve the sweetness you want.

When the cream is fluffy, turn the speed down to low and gently add in the refrigerated leftover risgrot until well incorporated into the whipped cream.

Serve with toasted, sliced almonds, and a drizzle of the red berry coulis.

To make coulis:
In a small pot, add the sugar and water and heat up until sugar is dissolved. Add the berries to a high-speed blender along with the sugar-water (syrup) and blend until smooth. Refrigerate until ready to use. 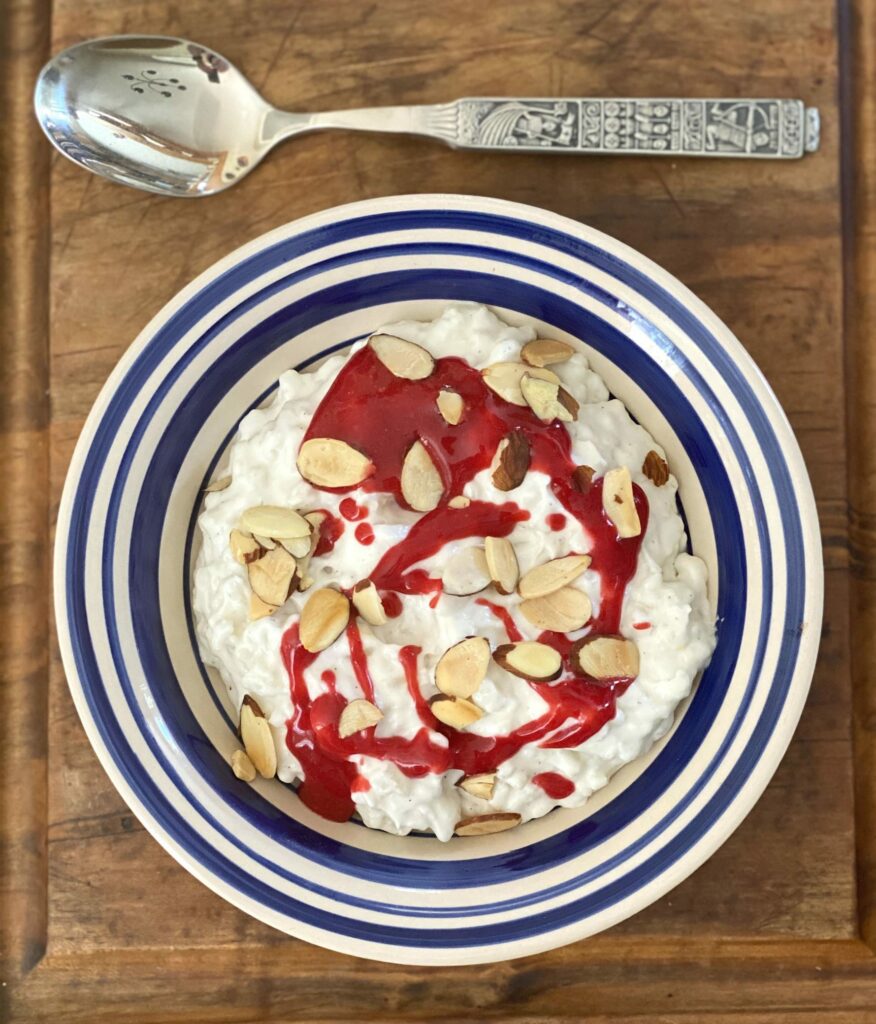 To make the risgrøt / porridge:

← A Soup for Potato Lovers Norwegian Flag Cake for May 17th →